How cheap dockless hire bikes are flooding the world

Cycling around cities may have been pioneered by the Dutch, but a new high-tech way of hiring bicycles is bidding to bring a pedal power revolution to cities around the world.

The key innovation is the dockless hire bike. Found and unlocked with a few taps on a smartphone, they can be hired for an hour, day, or week – then locked up and left wherever the journey ends, rather than a special docking area.

These now make up the majority of the 18 million self-serve, public-use bikes around the world, in 1,608 cities.

That’s up from just two million at the end of 2016, says Russell Meddin, co-author of an online world map of bike sharing.

Most of this growth has been in China, where two start-ups, rich with backing from the country’s rival giant business groups, are battling for dominance on the streets.

Alex Borwick, who lives between Shanghai and Beijing, was an early Mobike user. She calls bike sharing “much easier than having your own bike as you don’t have to carry a lock and worry”.

And she “definitely” has used the service more for being dockless, because it “means you can take a bike to where you need to go, not to a dock”.

This duel saw some 1.5 million bikes pushed onto the streets of Shanghai alone. But the battle for market share left mountains of castaway bicycles in fields near Shanghai and places like Xiamen in the south-east.

“There were and are some bicycle mountains, but now there seem to be fewer now,” says Jady Liu, an undergraduate student at Beijing Normal University.

In September, China’s large cities prohibited companies from putting any new bikes onto the roads and since then the mountains have started to disappear.

Mobike has spread to 100 cities, including Manchester in 2017 and Berlin earlier this year.

Aside from the convenience of being able to leave it anywhere, dockless bikes are massively cheaper to run than these more familiar dock-based schemes.

A typical London bicycle dock with capacity for 25 bikes, costs about £100,000 to install and maintain, says Mr Pyer.

Moving the locking and payment technology from the dock to the bicycle means you can deploy them very quickly.

The onboard tech is powered by a battery charged by a dynamo as the cyclist pedals.

The success of the bikes in China has attracted investors’ interest. Venture capital investment in dockless bike-share firms around the world reached $2.6bn (£1.9bn) in 2017, up from $290m in 2016, according to San Francisco business intelligence company Crunchbase.

Karan Girotra, a professor at Cornell University’s new graduate programme, Cornell Tech, says there is a rush to be first into new markets, with firms betting that “once you get in there, you will acquire customers and drive other competitors out of business.”

Dockless bike riders don’t always leave the bikes in the ideal places for other riders to start their journeys, so the scheme operators do have to move them around.

In Oslo, one start-up has been using machine learning – a sophisticated form of data analysis – to predict how to distribute bikes most efficiently.

“We try to maximise the number of trips each bike takes before we need to move it again,” says Axel Bentsen, chief executive of Urban Infrastructure Partner, which runs Oslo’s bike sharing programme.

“It’s very difficult to do that manually, and machine learning is finding patterns and suggesting changes we wouldn’t be able to come up with ourselves.”

Car-sharing companies are eager to branch into bike-sharing for passengers’ short trips at the end of a journey.

An Army sergeant accused of trying to murder his wife by tampering with her parachute has told a court of his “spiralling” debts.

Emile Cilliers, 38, of the Royal Army Physical Training Corps, denies sabotaging Victoria Cilliers’ parachute in a bid to kill her.

The prosecution alleges Mr Cilliers, who owed about £24,000, planned to start a new life with his girlfriend.

Giving evidence at Winchester Crown Court, Mr Cilliers told jurors he had been borrowing money from his wife in addition to taking out high-interest payday loans.

He told the court his debts “were spiralling” out of his control.

Jurors heard he had transferred £6,000 from his wife’s bank account into his own without permission, and then told her the account details had been hacked.

He bought expensive sporting equipment, clothes for himself, holidays and, on one occasion, spent £6,500 at a garden centre.

The court heard he was having sexual relationships with his wife, his ex-wife and also using prostitutes.

Prosecutors allege he believed he would receive a substantial sum on his wife’s life insurance and planned to start a new life with a woman called Stefanie Goller.

The prosecution claims Mr Cilliers, an experienced parachute packer, tampered with equipment he knew his wife was going to use.

Lines to the main canopy were twisted and essential parts were missing from the reserve.

The court heard the equipment had never failed in this manner anywhere in the world.

Mr Cilliers is also alleged to have deliberately caused a gas leak at the family home in Amesbury.

If seven in 10 oysters have norovirus, should we still be eating them?

They are tasty, nutritious and having a renaissance – why it’s time to stop worrying and enjoy them

Our much-loved molluscs have had a bad rap in recent days, with government scientists claiming that seven out of 10 oysters sold may harbour the norovirus bug . But as David Jarrad, head of the Shellfish Association of Great Britain has pointed out, the tests are flawed. They identify the amount of norovirus in the water, but do not differentiate between active and inactive viruses.

Our love affair with oysters is long standing. At the turn of the 20th century, the oyster industry was one of the largest in the country. And for a good reason: oysters were cheap and nutritious. Overfishing led to them being restricted to high-end restaurants for most of the 20th century, but they have been having a renaissance. The world now is our oyster – they are being served up at street food markets all around the UK and you can even buy them at pubs and music festivals.

So if you – like so many of us – enjoy tucking into a delicious, nutritious oyster, then fear not. You are more likely to catch norovirus in your local supermarket than you are from eating an oyster. 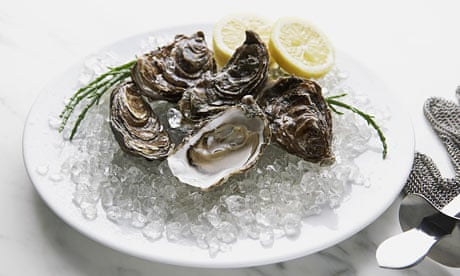 Shellfish poisoning: what are the odds?

Of course, there is a risk from eating oysters – they are harvested from the wild, after all. But the oyster itself is not the culprit, rather the water in which it is raised. All the oysters sold in the UK are purified for 42 hours, which largely nullifies any danger. But to be completely safe, you can always cook oysters – or easier still, just zap them in a microwave, which would kill any residual traces of the virus.

So should we still be eating oysters? Of course: they are good for you, and tasty, too. The story reveals more about the public scandal of our polluted coastal waters than any perceived risk from eating oysters.